Quick Catch Up On The FACEIT Major

FACEIT Major 2018, Counter-Strike: Global Offensive (CS: GO) tournament, will return in a few hours. The first stage of FaceIt Major London in 2018 ended on Sunday. After five days of competition, eight teams qualified for the second phase of the competition, the New Legends Stage

How was the Legends Stage

The Legends Stage took place between the 12th and 16th of September. In this stage we saw G2 Esports, HellRaisers, Winstrike, Team Liquid , FaZe Clan , BIG, Fnatic , CompLexity Gaming, MIBR , TyLoo, Mousesports, NiP, Natus Vincere, Astralis , Cloud9 and Vega Squadron. After competing against each other for days, mouz, Winstrike, TyLoo, Vega, G2, Fnatic, NiP and Cloud9 were eliminated from the tournament. It is worth mentioning that Cloud9 continues its terrible form which is nowhere near from the winning performance of ELEAGUE Major: Boston. 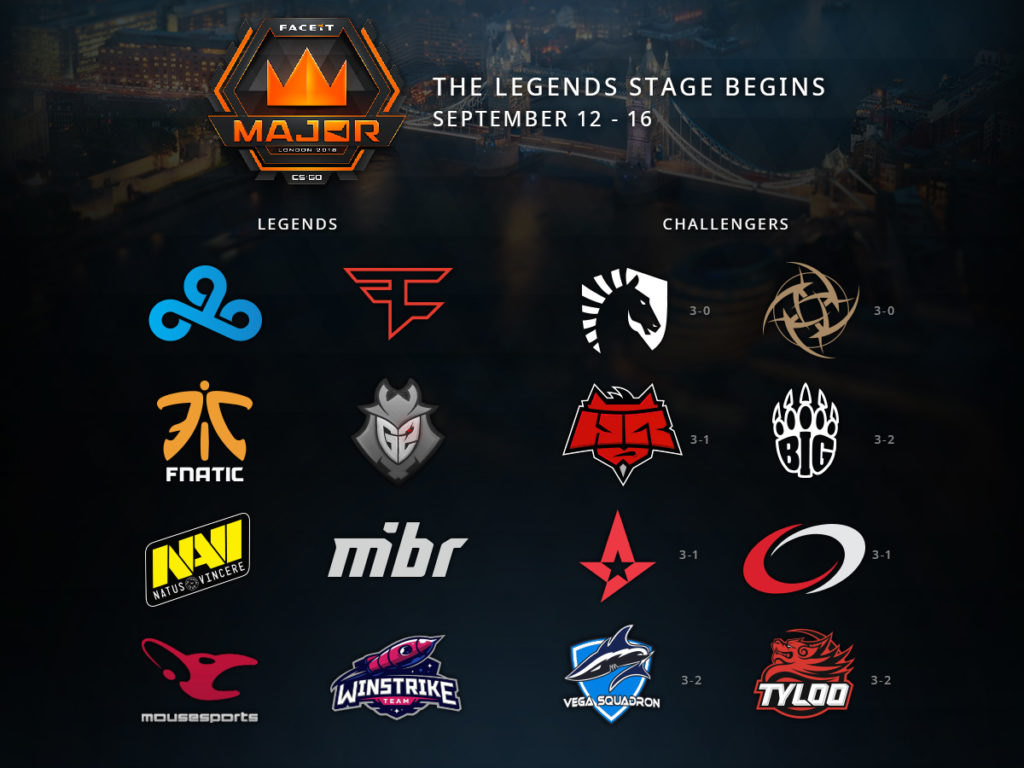 The Brazilians, though among the finalists, had very different performances. In addition to the complexity, Liquid was the only team to pass to third stage without defeat. Highlight for Liquid so far was 19-15 overtime victory in a fierce game against Astralis. The Brazilian team MIBR debuted with defeat against TyLoo but winning against mouz, G2 and NiP. However, the nightmare for MiBR so far in the competition is the historic defeat to Astralis: the first 16 to 0 loss in the Majors’ history.After five days of disputes, eight teams remain that will go to the third and decisive stage of the tournament.

The third and final stage of the FACEIT Major will be played in a single elimination system in a best of Three (BO3) format. Among the finalists is BIG, the runner-up of the ESL One: Cologne 2018, which will give them a huge boost against Na’Vi. FaZe Clan competes in its third tournament after the return of Olof “olofmeister” Kajbjer. While the presence of Astralis, the great powerhouse of CS: GO in 2018, will guarantee us some exceptional performances.

MIBR will compete against compLexity Gaming, who are one of the fairytale stories of the Major. Liquid plays against HellRaisers, whose performance in the Legends Stage was not quite convincing. Check below, the list of the quarter final matches:

The FACEIT Major is the last major of Valve in 2018. It is currently happening in London, England, with only 8 teams remaining out 24. The competition is following a new format, dividing the competitors into three stages – Challengers, Legends and Champions. At the end of the competition, the 14 best-placed teams will obtain the status of Legends, and will be invited to IEM Katowice 2019. In FACEIT Major, in addition to the title, the winner will bring in the sum of US $ 500,000.