After the arrival of Magisk, the Danes team, Astralis have achieved outstanding results during their first 75 competitive maps.

At the moment, DreamHack Masters is attracting the attention of the community. However, it goes without saying that Astralis is in the spotlight and for all the right reasons. Recently HLTV has revealed the statistics of the best LAN Teams of all time in the first 75 maps after the arrival of new players or in other words formation of a new roster. Let’s have a look at the picture and analyze what the fate holds for Astralis compared to other teams on the list. 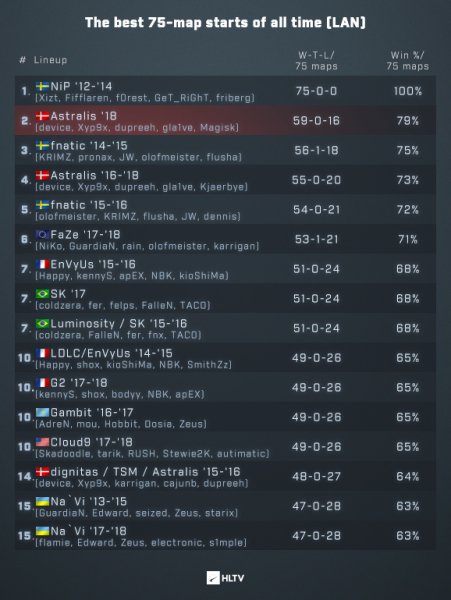 As you can see, Astralis is the second most dominant team in history. The first place of NiP is likely to be no conquered by no one. The Swedish side set the record of 87-0 way back at the dawn of the Global Offensive competitive circuit. It would be impossible to repeat this feat in the current scene and honestly, there would be no realistic expectations for any team.

The Swedes simply took the field with an unbeatable dominance. However, we cannot say that the quality of such performances has not been approached by the other teams. Since Magisk has arrived at Astrais, the team has won 59 out of the 75 maps played. This is an exceptional record since these days the competition is quite tough. No one is a clear favorite and top teams losing to newbie players just doesn’t surprise anyone. However, it is fair to say that Astralis has been lucky.

In my opinion, if you are on top of the world, and if you are unbeatable for months, then after a while the fans and the players think that they will stay on top forever. However, the team gets worked up and is bound to lose and may very well never get back to its title-winning ways. They lose their charm just like the legendary rosters of NiP, VP, and SK. Astralis, on the other hand, it was fortunate in this respect because they lost a couple of times, but had a lot of breaks during the spring season and therefore comfortably collected trophies while minimizing stress in their games.

NiP is hardly preceded by anyone on this list. However, I do not consider it impossible for Astralis to have a better team after a lot of consistent performances and setting a bigger record. But, of course, we have to wait a while for that.

Currently, at the DreamHack Stockholm, Astralis have and a 1-1 record in the group stage. Today they play against TyLoo to secure their spot in the playoffs. We should expect a dominating win for the team as they have beaten their opponents several times this year. So will Astralis win the title and set themselves up for an impressive feat? Or will they choke under pressure and fall like so many teams in the past? Only time will tell.