Practices That Can Get You Banned In League Of Legends

League of Legends has rules for you to follow as any online game. Certain types of behavior can lead players to mild, moderate, and even permanent suspensions, depending on the severity of the situation. Riot Games, the developer of MOBA, has several mechanisms to detect misconduct and apply punishments to casual and professional players. Here are some practices that are banned in the game and have even pushed athletes away from the competitive landscape.

It happens when a user pays another person to raise their account in ranked queues. The payment is made without the endorsement of Riot Games and damages the whole ecosystem of the game. The developer considers this type of conduct an unfair way to move up the rankings. Marcelo “Riyev” Carrara, André “esA” Pavezzi,and Bruno “Brucer” Pereira, have already been suspended for account boosting.

Riot Games does not tolerate names that are offensive. According to the rules of the official website, nicks ” defamatory, vulgar, obscene, sexually explicit, racial and ethnic ” are punishable. The company is also entitled to change names of players, if you prefer. Suspensions, in this case, are only applied if the player continues to put an inappropriate name.

Use of any unauthorized software is strictly prohibited in League of Legends. These softwares can be categorized as: hacks, macros , scripts, bots and mods. These programs are used to perform automatic actions such as escaping attacks and hitting skills with 100% accuracy. Softwares of this nature put other players at a disadvantage and are considered cheaters. In 2005, the player Vermillion, of ANT Gaming, was caught using script in the Turkish second division.

Refunding purchase amounts made by the credit card in League of Legends is grounds for suspension. This applies to any type of service acquired within the game, such as skins, summoner icons, boosts, sentinels and other products available in the virtual store. The practice also has another negative consequence: all reimbursed products will disappear from the user’s account.

Spamming, i.e. publishing the same message in short intervals, is an undesirable practice in all areas of the Internet, and League of Legends is no different. Spam in the game’s chats may result in banishment as it disrupts the flow of communication during clashes. This is a type of behavior considered illegal by Riot Games. 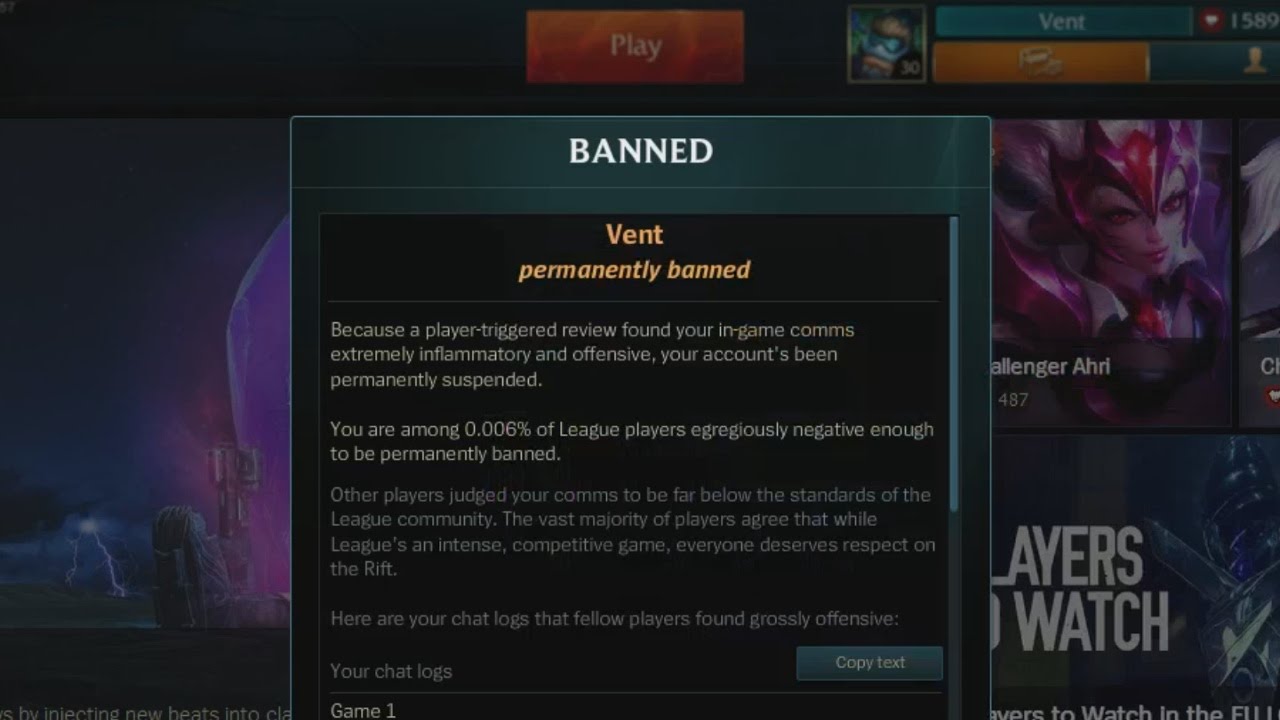 How does Riot’s Ban work?

Riot has a user tracking record that can be used to prove violations. All chats, for example, are stored temporarily. The monitoring of players is also done by the community itself. Users are free to report transgressions through the Instant Feedback System, a public tool in the game.

As for the types of banishment, the penalties are four and work gradually. This means that if the player has exhibited illegal behavior, punishments will be more and more strict.