Being in one of the 3 lanes in the early game is important because of the gold and exp gain, but there is another place you can farm: The Jungle.
Neutral creeps spawn at predetermined locations (camps) in the jungle and stay there until killed by either team. There are very few heroes in Dota 2 that can effectively gain gold and experience in the jungle at the start of the game due to the strength of the neutral creeps, but having such a hero can help out your team by more effectively farming the whole map.
To move your hero to go to these lanes, you select your hero by left clicking on your hero with your mouse and then right click the ground to move your hero to that position. If there is an enemy where you right click, you will issue an attack command, which means your hero will move to that target and attack when in range. All heroes have a basic attack that is often called a right click or right clicking. This is the main way that you do damage, especially in the early game, because it doesn’t cost you any resources other than time. Most heroes do a low amount of right click damage in the early game because their levels are low and you don’t yet have gold to purchase the costly items that make your right click’s stronger.

To sum up the very beginning of the game, heroes are distributed to each lane depending on their role and then do their best to get last hits and exp while limiting their opponents’ last hits through denying, harassment, and other advanced methods.

Laning is not quite as simple as just last hitting, as your opponent can attack their allied creeps when they get below half of their Health Points (HP) by pressing the ‘A’ key for attack and then left clicking their low HP creeps. If they last hit one of their creeps instead of you, it’s called a deny and an exclamation ( ! ) point will appear over  the creep’s head, showing that the creep was denied. When a creep is denied, the enemy only receives 70% of the experience, with the remaining 30% going to the team that denied the creep. Denying a creep will not grant you any gold, but prevents your enemy from getting any either. 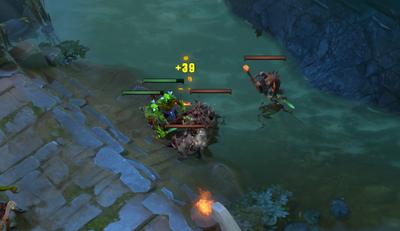 This creates a scenario where the player who is better at last hitting will get more gold and experience than their opponents, so focusing on last hitting or denying every creep will allow you to get the first advantage in the game.

My favorite advanced method to deny your opponents of gold and exp gain while enhancing yours is to Kill Them.

You will get opportunities to attack enemy heroes (called harassing) while you are laning, but that mostly depends on the hero matchups. Matchups in reference to the laning stage (early game) means what heroes you are playing, and what heroes your opponents decided to put in a lane against you.

If your opponent is playing a melee hero (a hero whose right click is very short range) and you are playing a ranged hero (a hero whose right click is a long ranged projectile like an arrow) then you have many opportunities to harass your opponent when they go for last hits. If you harass your opponent enough and his HP becomes too low, it may give you an opportunity to use your skills to slow, damage, or stun (preventing any action) your opponent and Kill Them. If you are the one getting harassed, make sure that you use your consumable HP regeneration items that you purchased at the start of the game to keep your hp full after you take damage so that the damage required to kill you is increased.  I’ll tell you which ones to buy later.

If you kill your opponent in lane or throughout the game, you accomplish a few things. First, your opponent isn’t in lane anymore because all dead heroes are removed from the map for a set time depending on their level, and after they respawn, they have to walk back to the lane from base. Any exp and gold from creeps that die while they’re gone is wasted. Second, you gain exp and gold for being present at their death, and that should make you a higher level, making your skills and right click stronger than your opponent.

Keep in mind that snowballing might be because of you. If you repeatedly die (also known as ‘Feeding’ your opponent gold) then you are allowing your opponents to get an advantage and snowball. DO NOT FEED. You want to maximize kills on your opponents, get last hits and exp from creeps and in the meantime minimize your deaths. To avoid feeding, if your opponents are trying to kill you and you think you will lose the fight, it’s generally best to throw your stun or slow (if you have one) and IMMEDIATELY run straight towards the nearest tower.

My second favorite advanced method to deny your opponents of gold and exp gain while enhancing yours is to Almost Kill Them.

By Almost Killing Them, you put their life at such a low point that they will be forced to run back to their fountain (which regenerates your health points (HP) and mana points (MP)). They will only go back if they are out of regen items, so it’s much better if you kill them instead. If they do run back to their fountain they are wasting time, as creeps are dying without giving exp, creeps are not being last hit, and no one is around to deny you while you are last hitting. This is not nearly as good as when you Kill Them, but it’s better than nothing.