One of the best eSports organizations in the world, Virtus.Pro is recently in the spotlight for all the wrong reasons. A few day ago, they posted a meme on Twitter that was not very well received by everyone.

The organizations in eSports are quite active on Twitter and post a lot of meme to gain followers and keep their fan base happy. This is without a doubt a very good practice that is loved by everyone. Even if it means criticizing others in a very humorous manner. But the gang bang meme posted a few days ago was actually no fun for anyone even for the Virtus. Pro twitter account.

Virtus.Pro taking success to its head?

We are all well aware that one of the oldest and most successful organizers, ESL has partnership with arguably the best car manufacturer Mercedes-Benz. One of the most exciting prospects of the this partnership is that the MVP of the event takes home a beautiful car home. In the past three ESL competitions, the MVP have been awarded to VP players, Vladimir “RodjER” Nikoghosyan, Alexey “Solo” Berezin and Vladimir “No [o] ne” Minenko. This is without a doubt an incredible feat. However, the organization went overboard put up a meme from that adult movies. That had five men standing behind a very worried looking woman. What Virtus.Pro did was replaced the men with its five players from Dota 2 lineup and replaced the woman with a Mercedes logo.

Even though the organization deleted the meme after posting it for a few minutes. But it created created a ripple effect, Paul Chaloner one of the renowned commentators of eSports screenshotted and posted it on his twitter account with a caption that criticized the norms of the organization. Another renowned personality Robert Paul saw the fun side of it and retweeted it with a sarcastic touch. 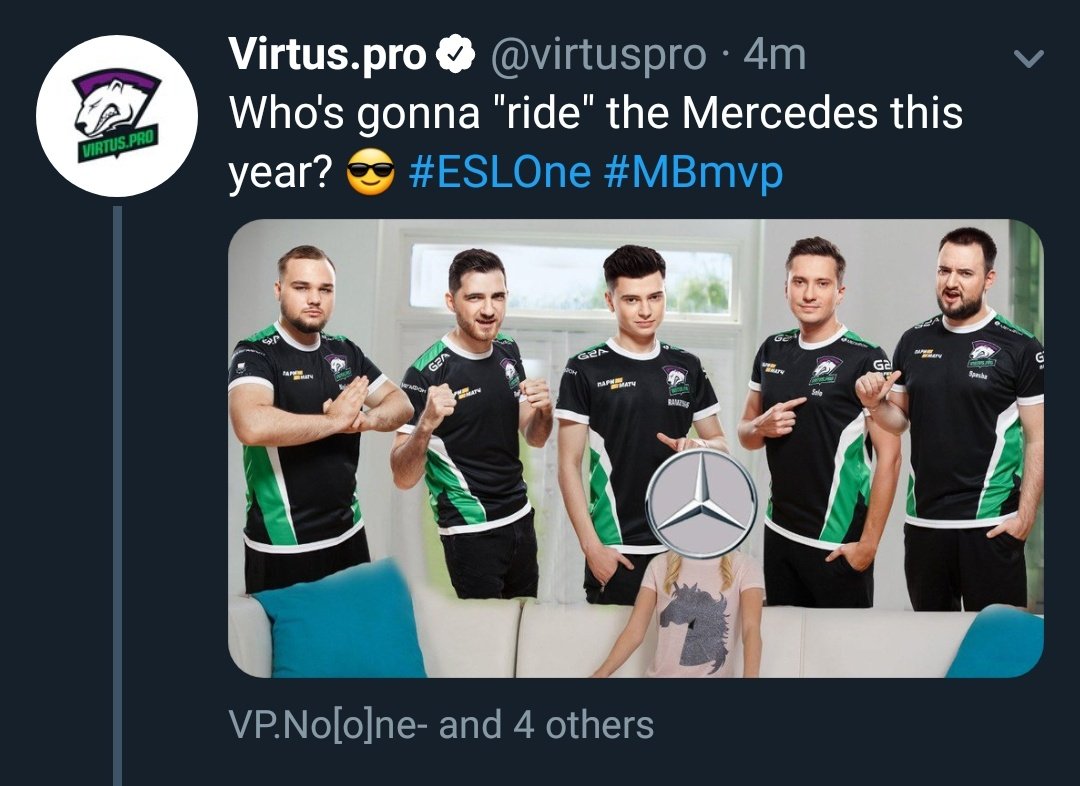 VP Slammed by the community

Alongside Paul Chaloner, the CEO and one of the founders of C9 criticized the managing bodies of Virtus.Pro and that they should look into this matter as soon as possible and think about letting go of some of the people.

In a matter of minutes after the the tweet of Jacky, Roman Dvoryankin the manager of the organization issued a tweet. In the tweet, he apologized and told that the strict actions have been taken against the people who put up the tweet.

Even after the apology of the manager, some critics think that organization should issue an official tweet for the apology. In our opinion, it is enough that the manger has come forward in a few hours and apologized the fans. The bodies that have posted the tweet should have known that a lot of the fans look up to these star players and want to achieve this level of success. Putting these str up on meme like these is not good for the underage fans. Since Internet is virtually everywhere on earth and putting up memes like these just spoils your image.